The awakening of a lion

The housing plan “Socio vivienda 2”, is known as one of the most dangerous sectors of the province of Guayas and is located northwest of the Buenos Aires city. The neighborhood has had several interventions from different governmental and non-governmental entities, but they have not worked in the neighborhood for a long time since they find it difficult to work with young people in the sector.

Fundación FútbolMás in early 2018 began the recognition of the community to accentuate a new neighborhood to intervene through its methodology, which seeks with football to promote values ​​and socio-sports training for the physical, mental and emotional development of children and adolescents of the Los Pingüinos sector in Socio Vivienda 2. 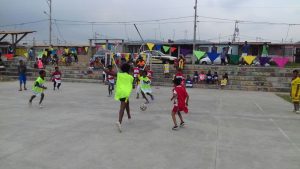 With the arrival of Fútbol Más in the neighborhood we can see the great interest of children, adolescents and people in the community to participate in one way or another, to create an atmosphere of peace and harmony in the populous sector of Guayaquil. In this way we understand that housing partner is a Lion in the process of starting to roar, not because of the bad, but because it seeks to change the way of thinking of other people. So that they do not dismiss it as a troubled neighborhood, but rather as a united community for the development of the children and adolescents that are the future of the neighborhood and the homeland.

Socio vivienda 2, a neighborhood eager to excel in the formation of their children and children of the community, the application of the football methodology shows a great change 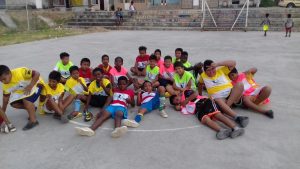 in each of the children and adolescents. The effort to change the way of resolving and fixing the conflicts between the children participating in the program is seen and noted according to the practice of the values ​​inserted by the socio-athletic instructor within the field, which focuses on obtaining disciplined young people and with desire to work in each of the activities carried out during the daily training period. Which are offered on Monday, Tuesday, Thursday and Friday from 3:00 p.m. to 6:00 p.m. in their respective categories (Children from 6 to 9 years old, minis from 10 to 12, girls from 10 to 15 and children from 13 to 15 years old. ).

Inside the neighborhood there are many stories like that of two minis who, despite being very small, express their effort, dedication and desire to pay for their studies making sales of belts in the city center in the Bay sector during the hours of the tomorrow to be free in the afternoon and attend sports training with Fútbol Más, in this way they help and contribute with their parents to purchase their school supplies.

This activity is carried out at this time of the year as they are on vacation and take advantage of selling more belts on the eve of the entrance to class in the city of Guayaquil. 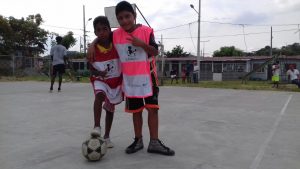 Juan said that he feels very happy with the training inside the neighborhood thanks to the fact that in this way he can integrate with more kids from the sector and that his dream is to be a great professional.

Really sometimes it is manifested that a neighborhood becomes dangerous, but nobody notices or sees the stories that encompasses the sector Socio Vivienda 2 community that with help and participation shows that it can be a better neighborhood and that it will roar very loud to be heard and understood of an ideal one, in terms of being a new neighborhood within the foundation will be felt in each participation as they are motivated and have the desire to awaken and change their lives from the heart of the neighborhood.