Jearim is a 13 year old boy, lives in the community of San Mateo del Mar, Isthmus of Tehuantepec Oaxaca in Mexico. Born in the ikoots community.He currently lives only with his father who is dedicated to construction. The community of San Mateo del Mar presents diverse political, social, educational and economic difficulties. It is an isolated and marginalized community. The conflicts that exist within the community mainly affect children and young people. From an early age, children begin to work to help support their families. Leaving school life and play aside. The issue was further complicated when on September 7 and 23 the isthmus of Tehuantepec was shaken by an earthquake. Many houses and schools in San Mateo del Mar were devastated. One of them was the house of Jearim, who had to stop studying to work full time and help support his family and the reconstruction of his home. 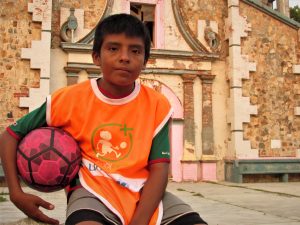 In January of 2018 the foundation of Fútbol Más came to the community of San Mateo del Mar to work with children and youth in the emergency program. One of the first children to approach was Jearim, he was explained in what was the program and was delighted. However, one of the most serious problems in the community are addictions, alcoholism is the most common, a problem that prevails in the family of Jearim, did not have the support of his dad because he never found it at home so that I could register it. Even so, he did not stop going to classes. He sought the support of a family member to enroll him, later insisted that his father go to talk with the soccer masters more and he did it. The conversation with his dad helped a lot to support him for his attendance at the classes. Jearim became a very participative student and an example for his classmates, although with a rebelliousness of his own age and situation.

Many positive changes were observed in him, he asks permission in his work on Wednesdays and Fridays for an hour and a half to attend his Fútbol Más classes, he is the first to arrive. What he earns per day, half is to contribute with the food of the house and the other half is for savings to be able to enroll in school next year, because when he grows up he wants to be a physical education teacher.

The date of the first league was approaching, Jearim was one of the participants. He attended the league alone, and was very nervous. The first game to be played was that of the minis. For many it was the first time they left their community. Time passed and they scored two goals. With the passage of minutes was marked a penalty in favor of San Mateo del Mar, decided that Jearim would charge the penalty. He was nervous, charged the penalty and the ball caressed the net of the goal igniting a cry of goal of all the boys and girls Ikoots. Jearim scored the first Ikoots goal in a Fútbol Más league. All his teammates got on the field to celebrate, everyone shouted loud and at the same time Jearim, Jearim, Jearim !!, classmates of all categories, parents of family, teachers, everyone knew the effort, knew the perseverance, knew the fight, the delivery and the heart. Everyone knew that it was a goal with a lot of history. At that time Jearim fulfilled a dream and gave a joy to all his brothers and sisters of the Ikoots people.